You can sit back and watch this video or skip it and read my story below.

You might be surprised to hear that the moment I decided I was going to go vegan, I was completely and utterly bummed about it.

Let me explain, I NEVER in a million and six years thought I would become vegan.

I grew up in a family of foodies, chefs, butchers, and hunters (yes, it's true). My household had a flock of chickens (both for eggs and for eating), the freezers were stocked full of meat, steaks were cooked rare, and there were even real animal heads decorating the walls (not that I ever liked the heads). Now, doesn’t that just sound like the most vegan household you have ever heard of? Probably not. So, as I’m sure you can imagine, switching to veganism was a BIG change for me. 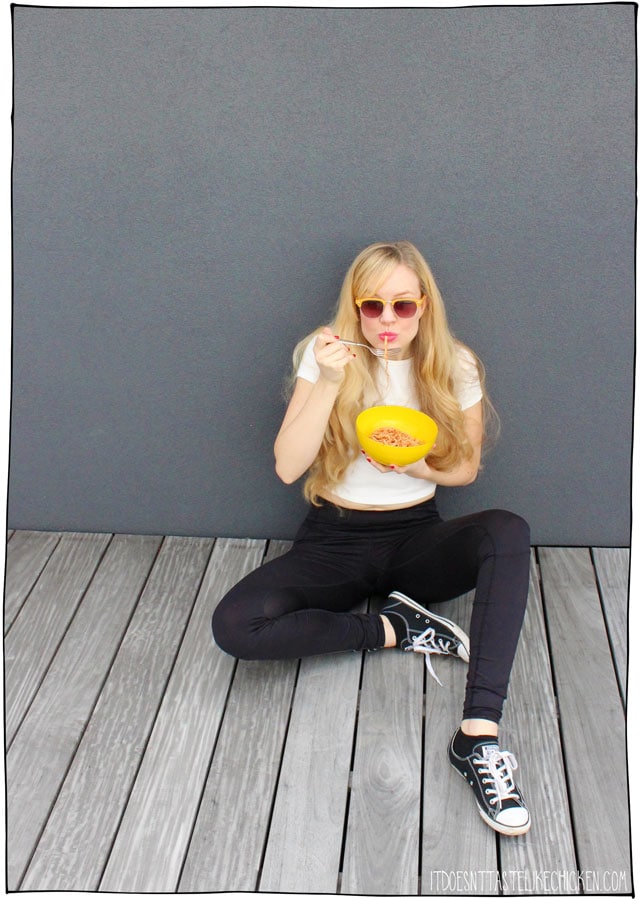 So what in the world happened?

As a kid I always loved animals. I had dogs, cats, gerbils, turtles, and even a rabbit named Gravy (no, I didn’t realize how incredibly odd that was at the time). But even though I loved animals, I was still an avid meat eater. It made sense to me: animals were killed because we “needed” to eat meat and that seemed a-ok to me.

I thought vegetarians, and especially vegans, were so extreme and silly. They were all dying of protein deficiency for sure. (Insert eye roll here.) So, that’s how I was coasting along through life. Loving my pets, being creeped out by fur and taxidermy, all while wearing leather and eating meat, eggs, and dairy. 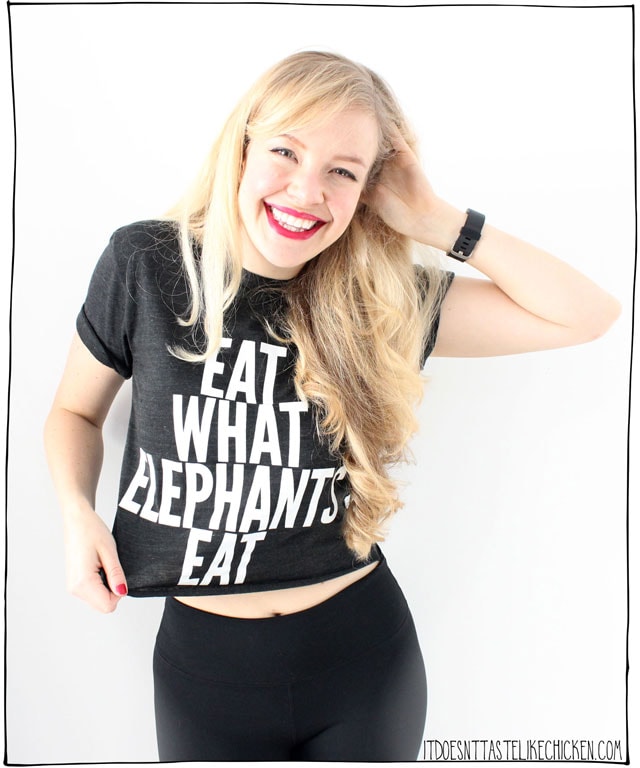 One fine day in 2012, I made (what turned out to be) the best decision ever: to sit down and watch a documentary about being vegan called Vegucated. And that triggered some uncomfortable questions in my brain. So the next morning I woke up and decided to try being vegan. I cleaned out my cupboards and fridge of anything that wasn't vegan and started this crazy new adventure.

I knew I wanted to try it, but I also knew I wasn't entirely convinced yet, so that night I watched Forks Over Knives.  And then I followed that up with every health, environment, and animal cruelty book and film I could get my hands on.

By the end of my documentary and book binge-fest, two things were absolutely clear to me:

After all of my research, it made 100% logical sense to me to be vegan. It was better for my health, the environment, and, of course, the animals. The problem was, I actually hated the idea of adopting a vegan lifestyle. I remember being so frustrated, almost wishing I could un-learn all of the facts I had learned. I loved meat and cheese, and I really didn’t want to be “that vegan girl.” Well, I couldn’t un-learn, so I had to come up with a new plan of attack: be the best damn vegan I could be! 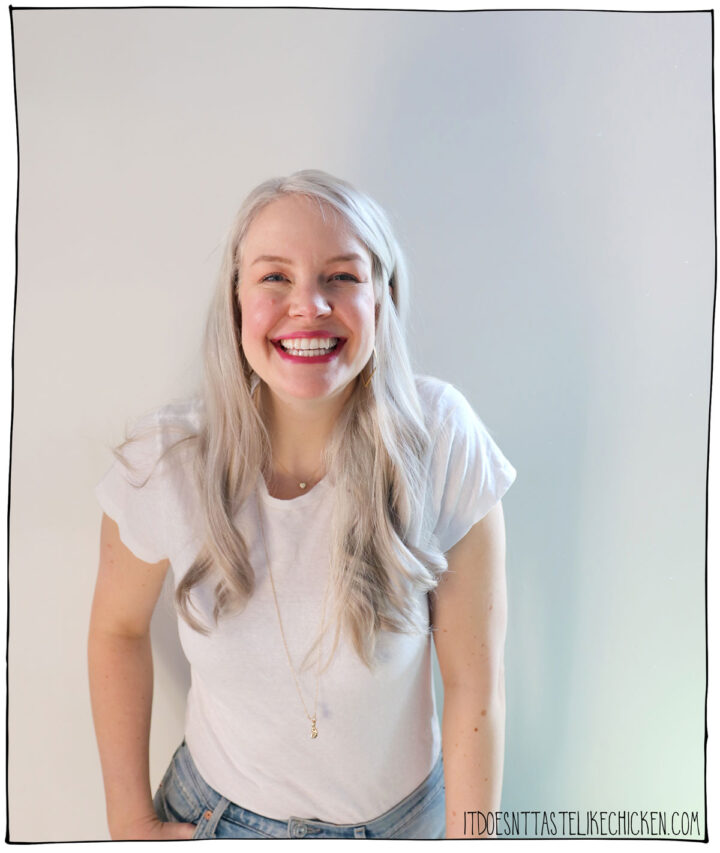 Becoming the best damn vegan I could be...

I had always loved to cook, so I started researching vegan cooking. I stocked my cupboards with what the recipes required: hard-to-find, expensive, and odd ingredients such as arrowroot starch, brown rice syrup, xylitol, guar gum, spelt, hemp, and other things that I still have lingering in some back corner. All the recipes had names that included the words “energy,” “glow,” “detox,” or “power,” and were mainly for bars, balls, juices, smoothies, and salads. They required hours of prep, dehydrating, and straining, and had a ton of steps. Cookies were raw, chocolate was frozen, desserts were healthy, dinner was spiralized, grain bowls were a must, and everything had kale, quinoa, chia seeds, sprouts, avocado, and coconut oil in it. This, to me, was indeed boring food.

Now, don’t get me wrong, there is nothing wrong with those kinds of recipes. They just weren’t for me. Sometimes I love a smoothie or a juice, but for the most part, I just want pancakes and pasta. Why did I have to become all sprouts and kale just because I was vegan? 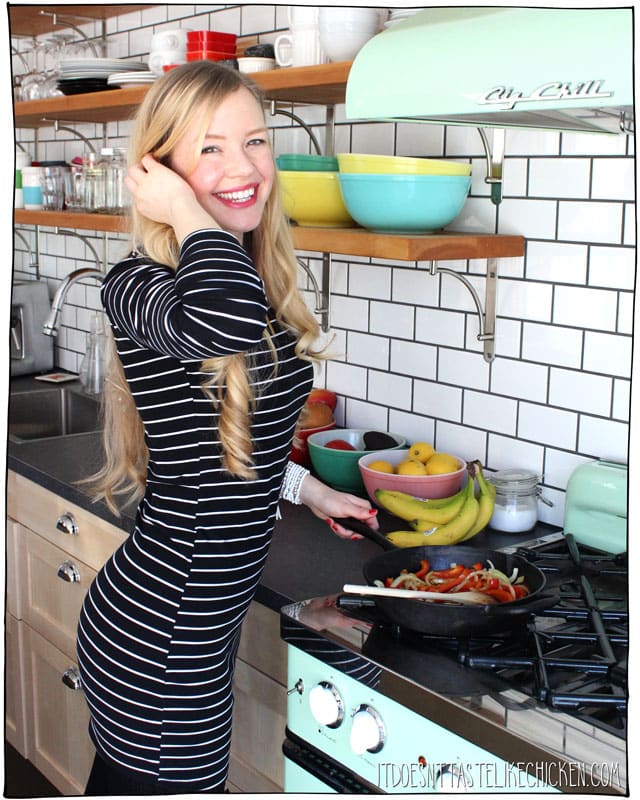 So, I began playing around in the kitchen...

I stopped the costly trips to the health food stores, and instead of using the recipes I had found, I started being inspired by my old favourite recipes. I learned that juices weren’t required, I didn’t have to love energy balls, and I could make meals that actually appealed to me and my friends (whether they were vegan or not). I soon discovered that any meal could be made vegan, and with a few clever tweaks, a large spice cabinet, and a dash of creativity, I began loving my recipes. In fact, I loved them more than the original animal product-based recipes.

Not only were my new creations satisfying, hearty, full of flavour, and straight-up delicious, but they were just as easy to make as any other meal. With limitation came inspiration, and before I knew it, going vegan had become one of the best decisions I’d ever made!

As a sweet bonus, I saw my health improve. I didn’t even know that I had been feeling bad until I learned what it felt like to feel great! Gone were the days of feeling bloated after eating, of having a sensitive stomach, of getting drowsy mid-afternoon, of unbuttoning my jeans after meals, and of feeling guilty and grossed out when I thought about what my dinner really was. I was now healthier, leaner, more energetic, and just overall happier.

The best and most surprising part of going vegan was that I absolutely loved it!

I started to document my recipes so I could make them again and again. At first, I was just taking quick snaps on my phone and jotted down the ingredients, but I decided a better plan was to (not so subtly) woo my friends, family, and anyone who would listen to the greener side by sharing my recipes online. And so this blog, It Doesn’t Taste Like Chicken, was born. Hot dang, it worked! Friends, family, vegans, vegetarians, and omnivores from across the world were making my recipes — and raving about them!

I think I’m like a dog. Pat me on the head and tell me I’m good and I will love you forever. As the feedback started rolling in, I really got passionate about blogging. Not only that, but I was helping to show people that a plant-based diet can be totally delicious, easy, doable, and good for you!

I have now made it my full-time career to share all of my totally scrumptious, approachable, comfort food favourites, and everyday meals made vegan. No fussing about, just good ol’ food that everyone will love, vegan or not.

When I first started cooking vegan, I thought I needed lots of fancy and expensive ingredients, that I would be living off of kale and quinoa, and that I would forever feel like I am limited in my choices. As I began experimenting, I realized that none of that was true at all!

What you WON’T find:

What you WILL find:

You can check out my recipe index, find me on YouTube or pick up a copy of my cookbook Fuss-Free Vegan or Fast Easy Cheap Vegan. SO MUCH DELICIOUSNESS TO BE HAD. 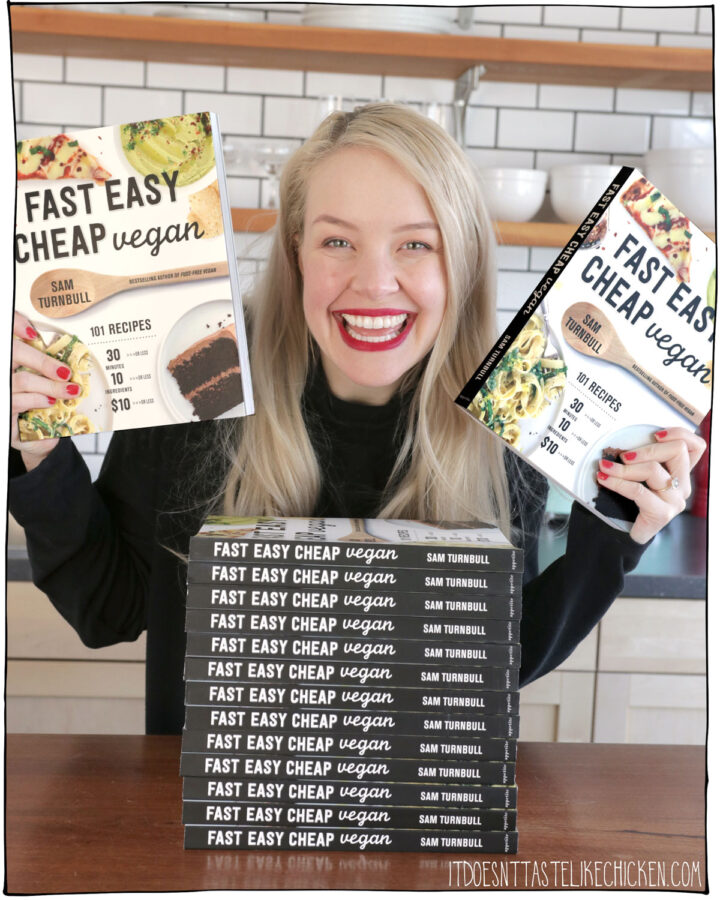 (A lot of the documentaries can be found on Netflix or YouTube).

First time visiting It Doesn't Taste Like Chicken? A big, huge, warm welcome from me! If you like what you see, be sure to subscribe so you never miss a fuss-free vegan recipe again.

If you ever have any questions, need any support, or just want to say hi, feel free to drop a comment below here or on any recipe. I do my best to respond to all comments within a few days. 🙂