There are few ingredients that I love more than pumpkin. I know, I know, it's all "trendy" right now, but I have loved pumpkin ever since I was a wee muffin. I have fond memories of my grandma's pumpkin pie. Eating giant bowlfuls of pumpkin soup in Malta with my best friend Danielle at just 13 years old (world travellers extraodinaire!). Meticulously sorting out the pumpkin seeds from the stringy guts on halloween after carving pumpkins, to then roast them all up. My addiction to pumpkin spice lattes while I lived in LA, they were an excellent meal replacement, (insert eye roll here). To now figuring out which ONE recipe I wanted to feature pumpkin in for my 100 Ingredient Recipe Challenge. I swear I could write 100 different vegan recipes featuring just pumpkin alone! Don't worry, I wouldn't do that to you... Probably...

So what did I decide to do with my pumpkin love affair? Not pumpkin pie, or pumpkin soup, no pumpkin seeds, and not even pumpkin lattes. Let's go classy and make Pumpkin Ravioli. Hey, wait! Come back, it isn't difficult at all, I swear. You know how I like my recipes, easy peasy lemon sneezy. So I call this Pumpkin Ravioli practically from scratch. I do a little cheat and buy pre-made dumpling wrappers. It's still the same basic ingredients, flour and water, and it makes preparing this recipe a breeze. And the result? A fancy looking meal that tastes so scrumptiously divine, you would have thought it would have taken hours to prepare. 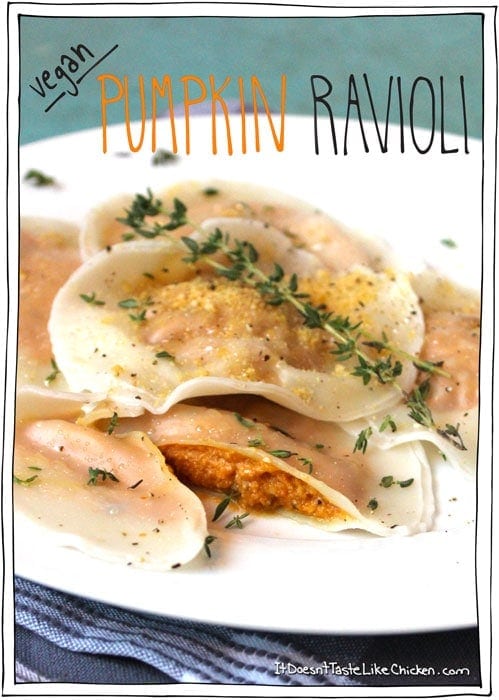 Pre-made wonton or dumpling wrappers (check to make sure they are egg free!)

Several pinches of thyme for garnish (and additional flavour) 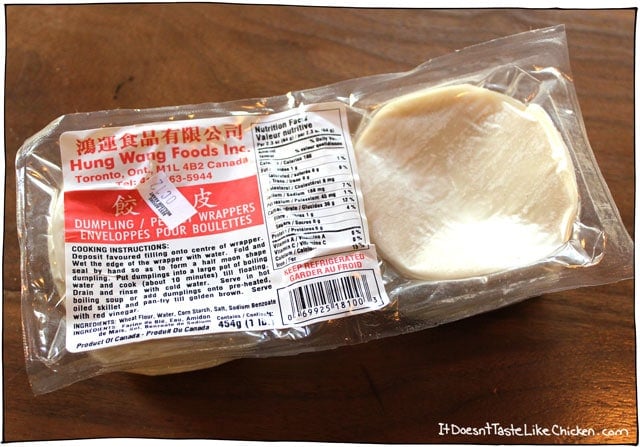 I'm not even going to comment on the name of this food company, nope, no comment from me. All I'm going to say is to just check out all the different dumpling and wanton wrappers available to you. Some will contain egg, so just grab whichever ones don't. 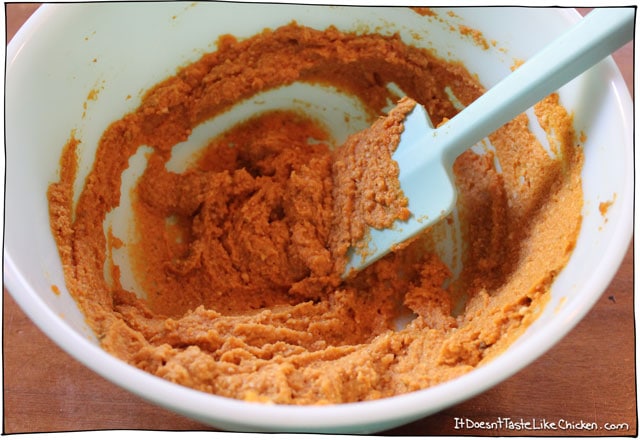 This filling is SUPER easy. Just toss all ingredients in a bowl and mix it up. Boo ya! If you don't have any Parmegan on hand, just toss ¼ cup cashews and ¼ nutritional yeast in a food processor or blender and pulse until finely ground before adding to the pumpkin mix. 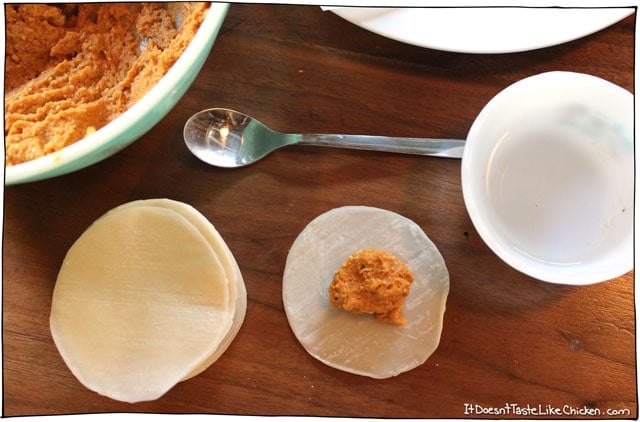 Now set up your ravioli making station. Yes I realize these are dumpling wrappers, but we are just going to ignore that word and skip directly to ravioli. To set up, just have your bowl of pumpkin filling, a small bowl of water, and a plate with parchment paper on it to set your finished ravioli. 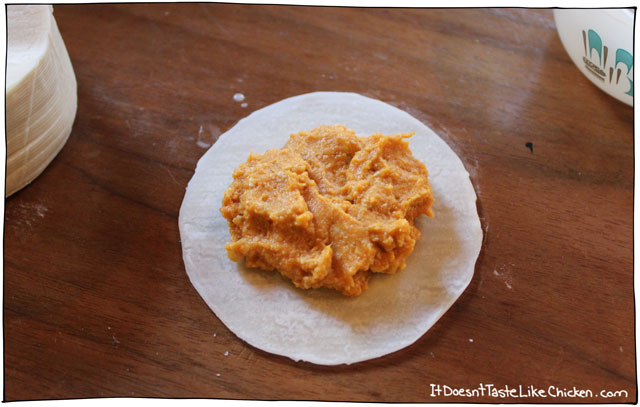 Take a spoonful of pumpkin goo and place in the middle of one dumpling skin. Flatten it so that you have a rough disc shape, it just makes it easier to stick on the top dumpling skin... I mean ravioli skin. 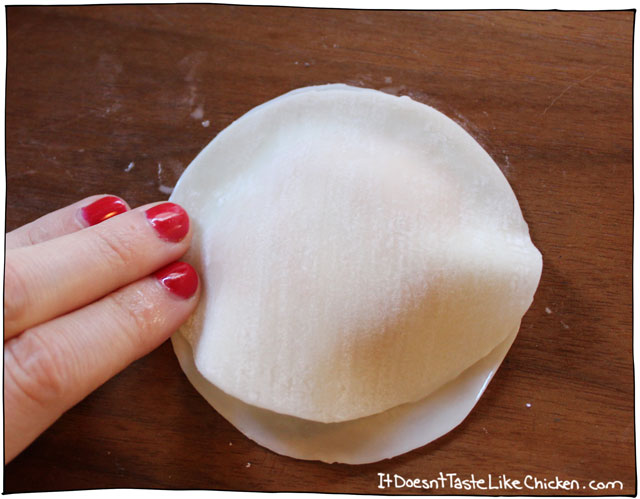 Wet a finger and run it around the edges of the dumpling skin. This is your glue so make sure you get all the way around. Put another dumpRAVIOLI skin on top and seal it down by pressing the edges together. Seal them tight so they don't pop open in the boiling water. 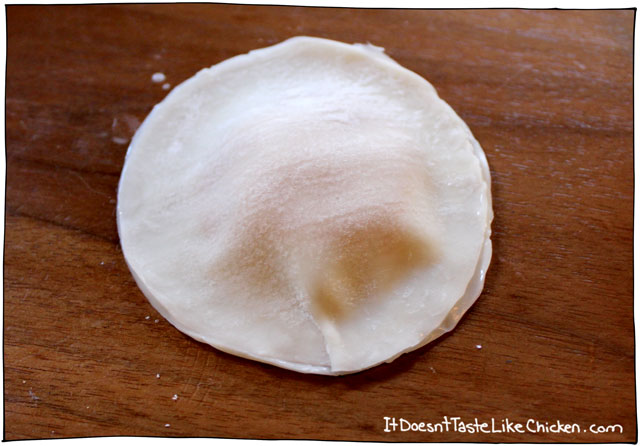 It will look like this... especially if you accidentally stick a wrinkle in it, but whatever it's cool. 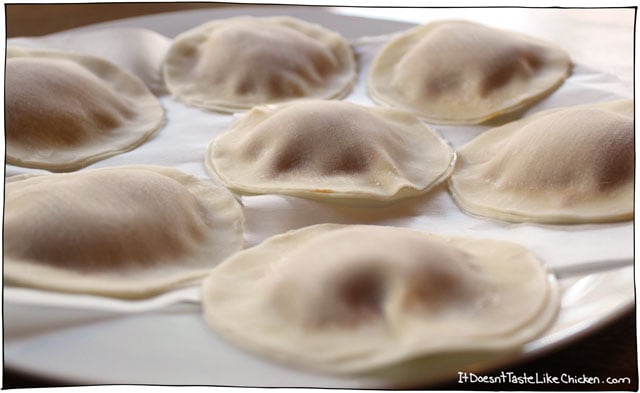 Once you have collected a plateful, they are ready to be cooked. If you want to make these ahead, you could lay a slightly damp clean kitchen towel on top of them, and then a layer of plastic wrap or foil so they don't dry out. They should be fine like that for several hours in the refrigerator. Alternatively, you could make the filling in advance and store in an air tight container in the fridge for up to a couple days. Then as your guests arrive assemble the ravioli in front of them so you look all impressive and stuff. 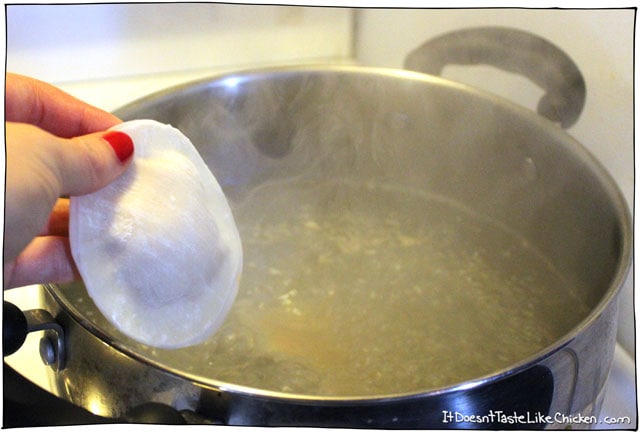 Bring a large pot of water to a rolling boil, and then drop in the ravioli one at a time so they don't stick together. I cooked mine in two batches to make sure they had lots of room to bounce around. Boil for 5 to 8 minutes until the dumplings have become transparent and are floating, then use a slotted spoon to fish them out. 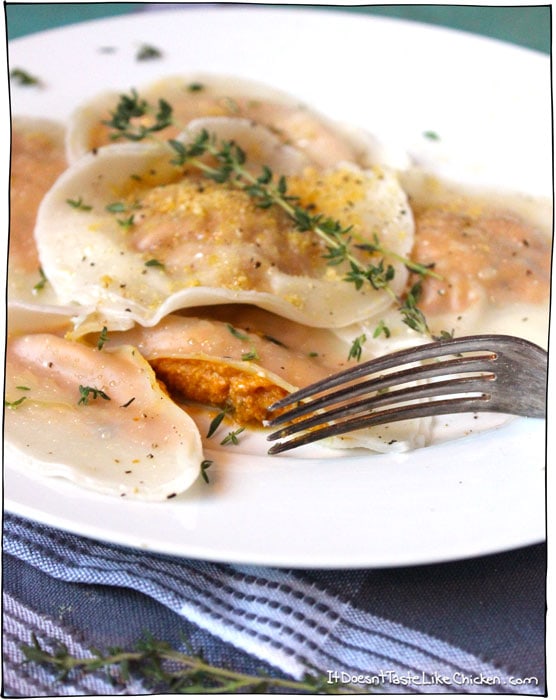 Sprinkle with some extra parmegan and several pinches of thyme.