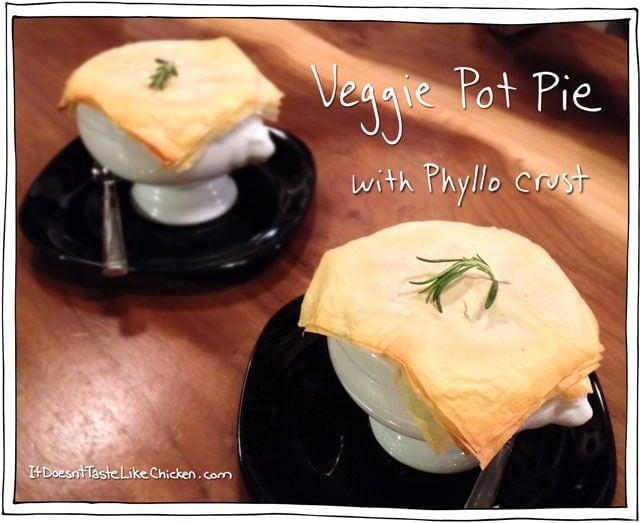 Chicken Pot Pie, shmicken pot pie. We all know the reason they say everything "tastes like chicken" is because chicken is boooorinnggg and just takes on the flavours of whats around it… Ok, I admit tofu does the same thing, but this isn't a tofu recipe! So back to where we were… The best flavour from a chicken pot pie, is all the glorious tastes provided by the veggies. So lets get to the good stuff and make a Veggie Pot Pie, and I guarantee, it definitely doesn't taste like chicken.

This pie is delicious, and simple, full of hearty veggies, with a light flakey crust. I admit there are several steps, but I broke it down for you in easy steps so that you see just how simple it is to make these cute little pies. I skipped the fussy crust, and instead used phyllo. Not only is is super easy to work with, but it looks pretty, and is flakey and delicious.

This is a great dish to serve at dinner parties. It's fun to get your own little pie, and you can make the filling ahead, then just layer the phyllo when your guests are arriving to look all impressive and stuff. I made this recipe in individual servings, because I think it is fun that way, but if you want to do one big dish, that will totally work too.

Makes about 5 or 6 servings.

1 Box (or a couple of handfuls) Mushrooms

Handful or two of Frozen Peas

A Big Spoon of Nutritional Yeast

1 Package of Thawed Vegan Phyllo… Is it just me or is "thawed" a funny word… I thawed I thaw a pussy cat… anyways for the dough, most phyllo is vegan, just be sure to check the ingredients

A couple spoons of Vegan Butter 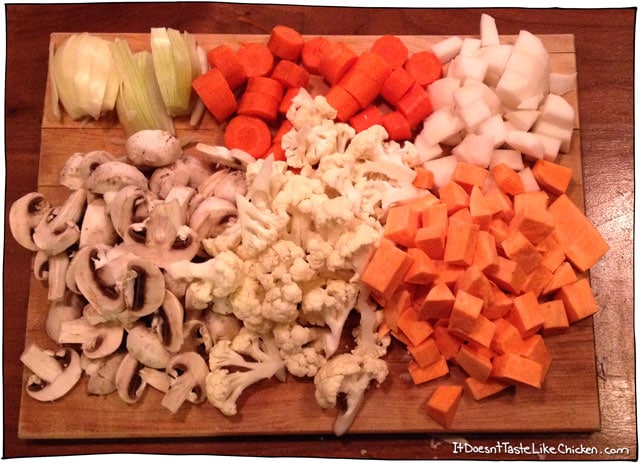 If you are going to make this recipe all in one go, preheat the recipe to 375F. If you are going to prepare the filling ahead, I will remind you later when to preheat the oven. Prepare all your veggies! Peel the carrots, turnip and sweet potato, and chop all the veggies into nice sized chunks. All roughly the same size. 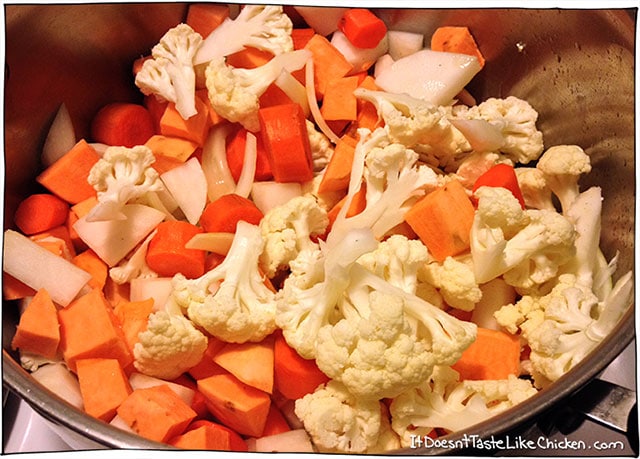 Heat a glug of olive oil in a big 'ol pot. Toss in the onion, carrots, turnip, cauliflower, and sweet potato. Give it a stir, and put a lid on it. Let it cook for about 10 minutes giving it a stir every now and then. 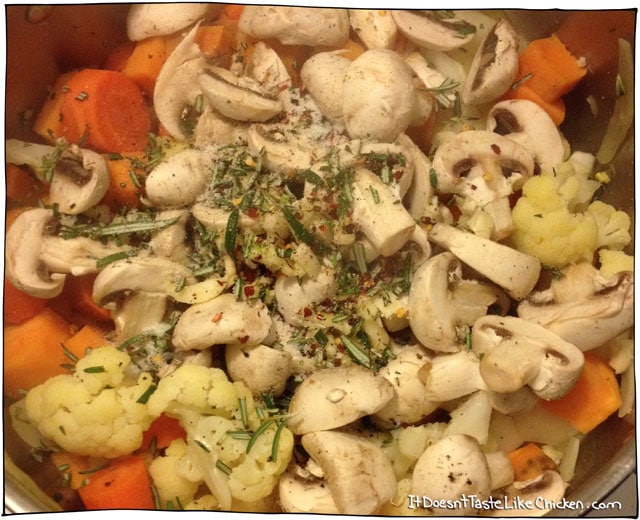 The veggies should be starting to soften, but not cooked all the way through. Toss in the mushrooms, garlic, rosemary, chill flakes, salt and pepper. Leave the lid off and give it a stir, every now and then sautéing for an extra 5-10mins until the veggies are mostly cooked, but still a little bit firm in the center. 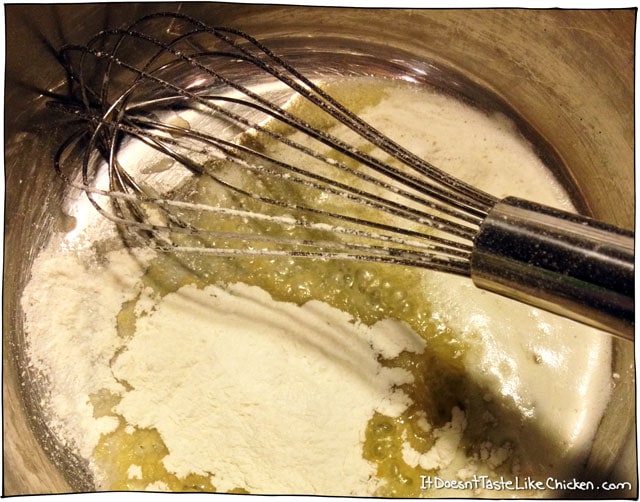 In the meantime, make the sauce. In a sauce pan, melt your big blob of vegan butter. Then whisk in the flour. The ratio of flour to butter should be roughly the same. This will form a paste. Let that cook for about 2-3 mins. This is how you make a roux, that will thicken your sauce. Now add the veggie broth, nutritional yeast, and pinch of chili powder, and a grind of pepper. 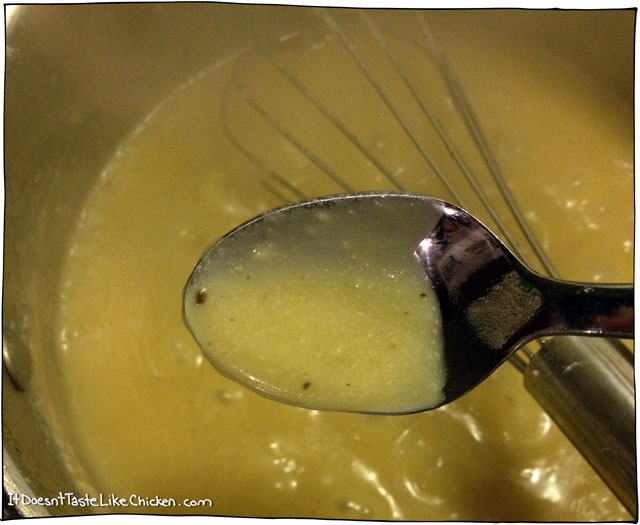 Whisk it up, and bring to a simmer. Cook for about 5 minutes so the sauce thickens. It should leave a thick coat on a spoon as seen in the picture. If it isn't thick enough, whisk in a bit more flour, and cook a little longer, until you have the desired consistency. If it is too thick, thin with some more broth, or a bit of water. 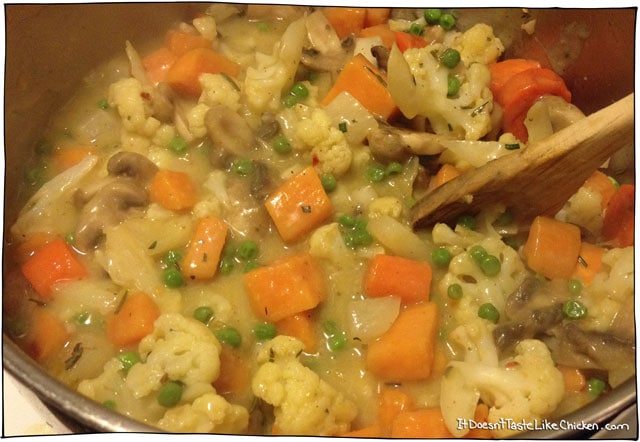 Once your sauce is complete, pour it into the veggie mixture. Now you can add your peas and stir it all up. Taste. This is your filling so add more seasonings now if needed. Remove from heat. At this point you can store the filling for later use. Just heat before continuing to the next step. 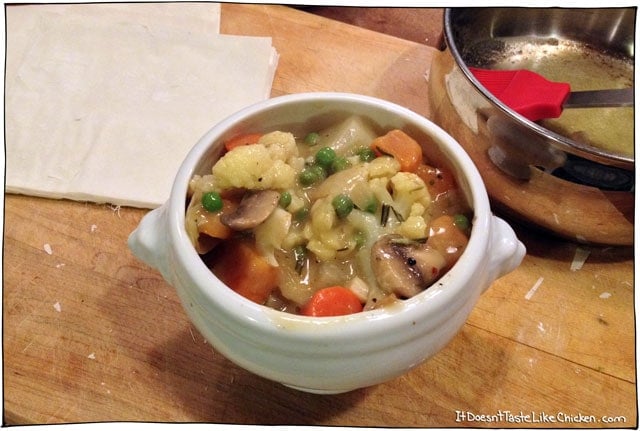 With your heated filling and your oven preheating to 375F, melt your vegan butter for the phyllo crust. I just tossed in a crushed clove of garlic when I melted the butter, so it would have an awesome garlic-y flavour. Cut your phyllo into squares that are bigger than your dish. You want them big enough so they drape over the sides of the dish. If you are using a big pie dish, the same rule applies. Fill your dish of choice with your veggie mixture. 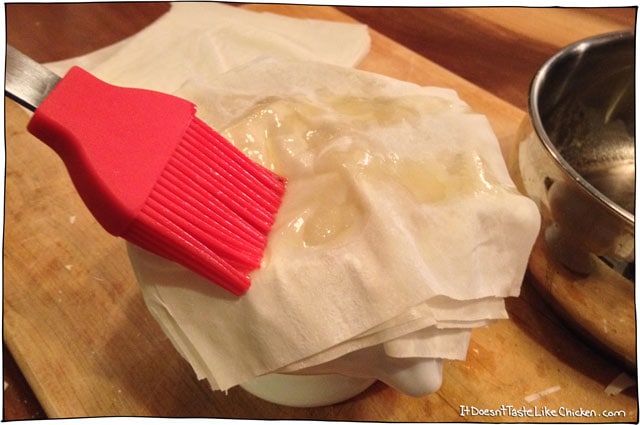 Now pick up one sheet of phyllo, place on top of the bowl, and lightly brush with your melted butter. If you get a rip in the phyllo, don't even worry about it, just keep going. Add another layer of phyllo, then brush with the butter. Do this again until you have about 5-6 layers, brushing the top when done. Poke a few holes in the top with a knife, to let steam out. Do the same with all the pies. Bake for about 20 minutes in the oven, keeping a close eye, until the phyllo is golden brown and delicious looking. 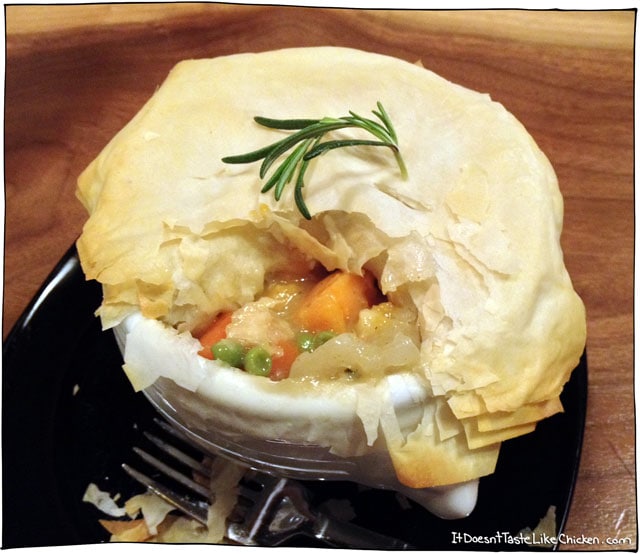 Remove from oven, garnish with a small sprig of rosemary for extra umph, and devour! …Well it will probably be really hot, so carefully devour.