It's congee time! 🍲 (Doesn't that emoticon look like congee? I think it is.)

What is congee, you ask? (Did you ask that? I am going to assume you did). Congee is an amazingly savoury Chinese rice porridge. It's also called Jook, depending on what region you are from or in. 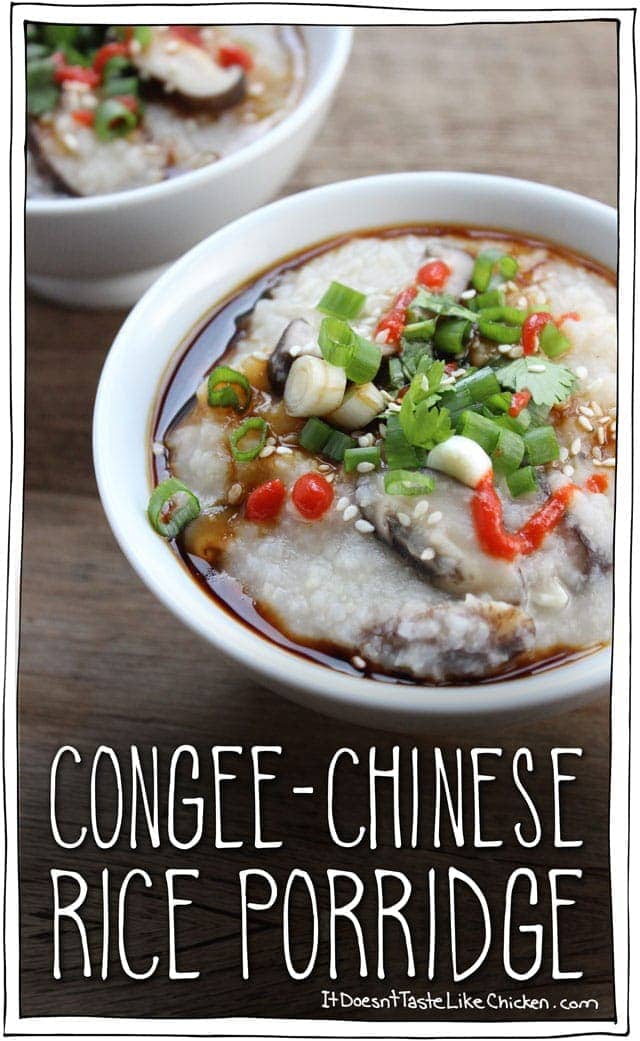 Have I mentioned that I have Chinese members in my family? If you have seen pictures of me, you might think I don't look at all Chinese. And you would be completely right. You see, my cousin married a Chinese woman and we liked her so much, that her family has merged with ours. Christmas dinner is now a mix of Canadian dishes, Chinese, Estonian (which comes from my aunt), and Italian (just because we like it). 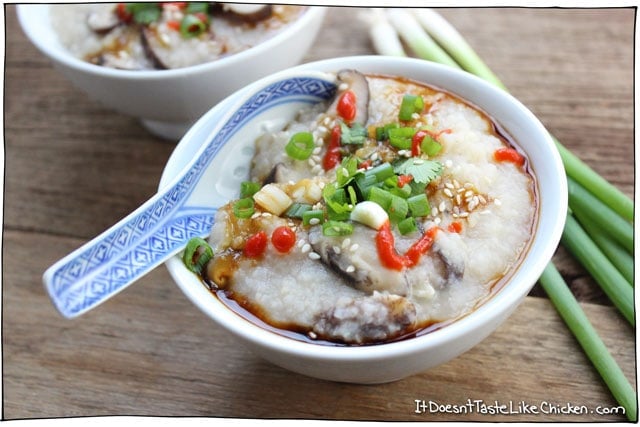 Back to congee. So I learned about congee from my Chinese side of the family. The basic recipe is 1 cup of rice and 10 cups of water. Simmer for an hour and a half, done. Anything else you add to it is up to you.

Congee is actually pretty bland in flavour (just like porridge), so it's really what you add to it that gives it that va va voom.

Traditionally, there is some sort of animal bone in there, which you may not be so surprised that I decided to opt out of for this recipe. Instead to make my vegan congee I used dried shiitake mushrooms, which are gorgeously chewy and flavourful. Cook them along with the rice, some ginger and garlic. Mmmmmm!

What Toppings to Use with Congee:

When the congee is cooked, it becomes ALL ABOUT the toppings. I like green onions, cilantro, sesame seeds, soy sauce, Sriracha, and a few drops of toasted sesame oil. Gosh golly gee... wait, what's the Chinese version of gosh golly gee? Google translate says Tiān nǎ tiān nǎ āiyā. I have no idea how accurate that is but I am going for it!

Congee is usually served for breakfast, but because it's savoury I just love it for a cold night. I have made many large pots of congee recently. I just can't seem to get enough! It's so easy to throw together and because you can top it however you like, it can be a whole new experience with every bowl you enjoy! It just makes me so happy. 🙂 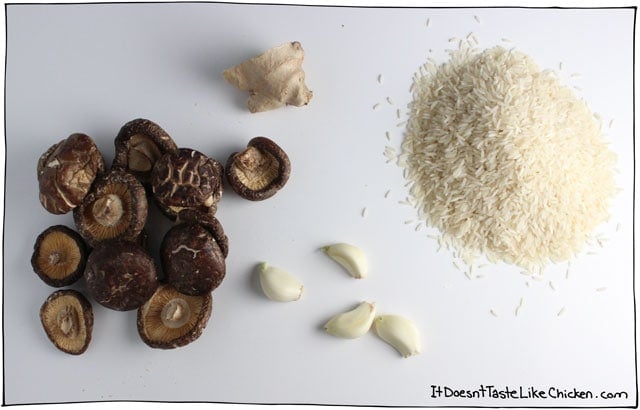 How to Make Vegan Congee: 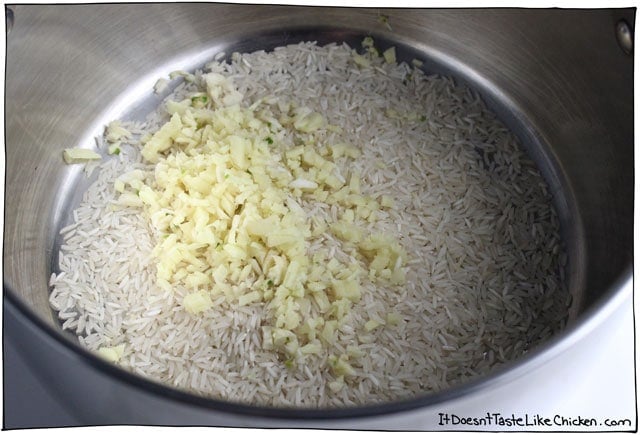 Add the rice, minced ginger, and garlic to a large pot, then add 10 cups of water. Yes 10. Bring to a boil and reduce to a simmer then set a timer for 1 hour and 30 minutes. 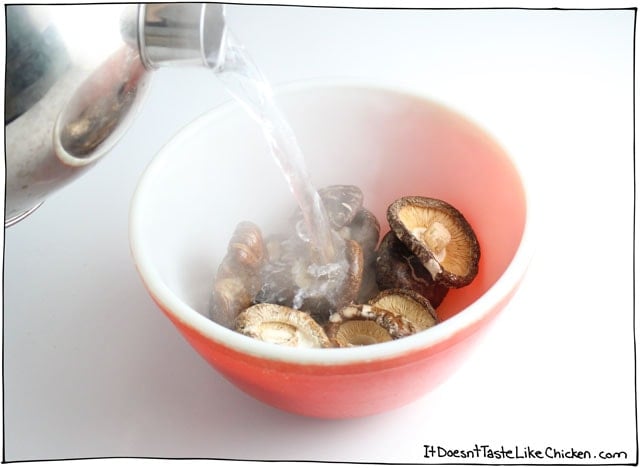 In the meantime, bring some additional water to a boil. Put the mushrooms in a heat safe bowl and cover with the boiling water. They tend to float, so I put another bowl on top of the mushrooms and water to help them stay submerged. Let them soak for about 20 minutes until softened. 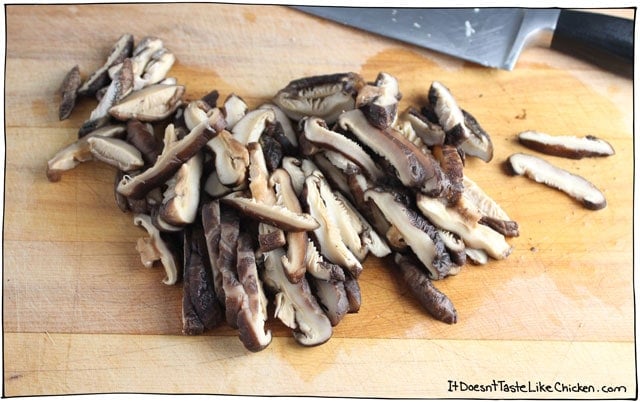 Drain and discard the soaking water. Thinly slice the shiitakes and add to the simmering pot of rice. It doesn't matter too much at what stage you add them, just as long as they are in there for at least 20 minutes, but I always put them in as soon as they are sliced. 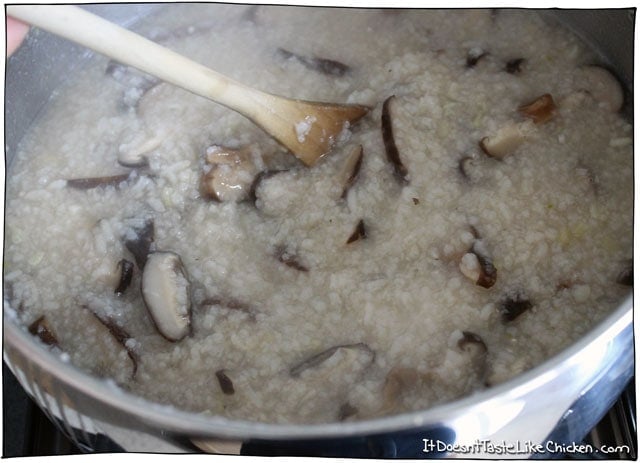 Stir the pot every now and then as it simmers, especially as it gets closed to being finished so that it doesn't stick to the bottom of the pan. When an hour and a half has past the rice should have broken down completely and become a thick porridge. If you prefer a thinner consistency, add more water until desired consistency is reached.

Serve with all your favourite toppings. If you are serving a group, it's fun to give a large variety of toppings, so everyone can garnish their own congee to taste. 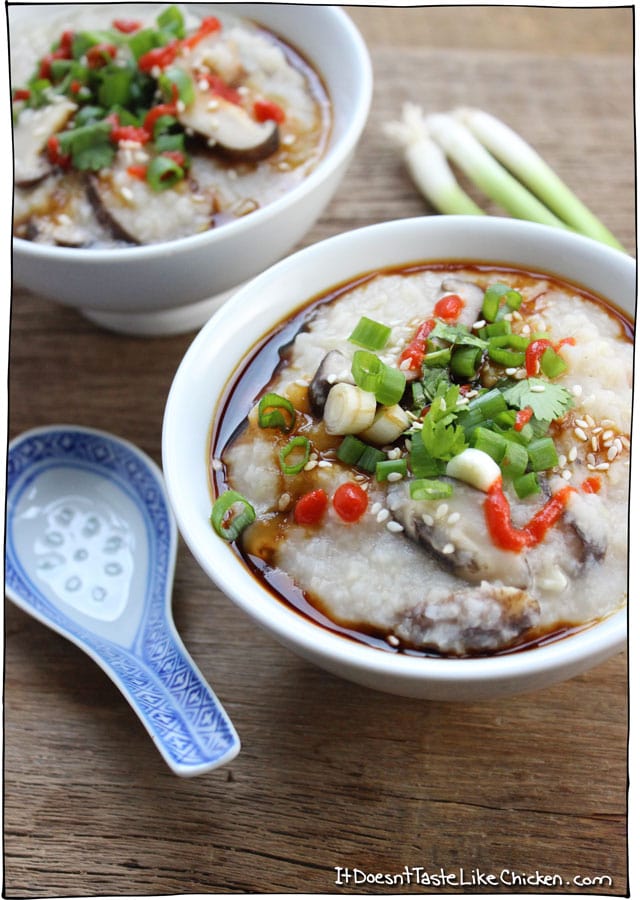