This one goes out to the new vegans in the hood. Welcome, my friends!

Back when I was working my vegan wooing powers (the powers are strong!) on my cousin Gretty who was considering going vegan, she would ask me a million questions about what I ate (once she started to get over the whole protein thing).  "Well, what do you do about butter?" I would tell her there was vegan butter. "What about mayonnaise?" there's totally vegan mayonnaise too. 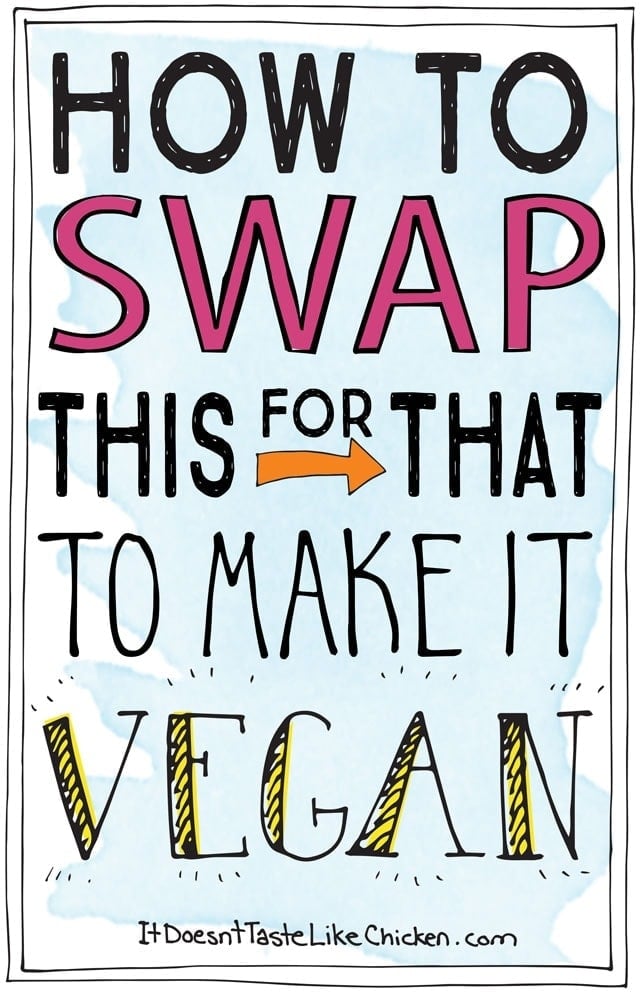 It seemed to blow Gretty's mind that there were so many vegan products available, making the switch super easy. She told me I had to make a post about it because people like her had no idea it could be that easy. 1 ½ years later, I'm finally getting this post written (and yes, she has been vegan for 1 ½ years now, woot!)

I thought this one would be the most fun expressed through video, so watch away and enjoy.

I point to a whole lot of stuff in this video, so I put the links for every product and recipe shown below. This is just a selection of vegan products and recipes based on what google showed me that day. There are so many more available so keep your eyes open for more great products and recipes!

*Not all of the brands and blogs linked below are 100% vegan. I did my best to link directly to the vegan products where possible, but if not clearly labelled vegan, just double check the ingredients before purchasing anything.

One of the common things I hear people say is "I could go vegan except for cheese". Well, there is totally vegan cheese! I even made a post called 16 Life Changing Vegan Cheese Recipes that starts off by discussing cheese addiction. (It's totally a thing)!  If you are a cheese addict (I was), there is good news for you, vegan cheeses totally exist. Not only can you get some pretty yummy vegan cheese on the market, but it can be super easy to make your own as well. My go-to mozzarella and nacho cheese will help you cover the basics.

As far as the rest of dairy products go, they have all be veganized and are easy to find in the stores or make yourself. Everything from non-dairy milks (there are so many vegan milk options!), vegan butters, yogurts, sour cream, you name it, it has been made.

Here is a list of links for all of the brands, and recipe photos I show in the above Youtube video. There are many more brands that I am sure I missed, and many more recipes available online. So keep your eyes open! 🙂

For anyone who loves the flavour of eggs, I always recommend that they pick up some black salt (also called kala namak). It's actually pink in colour, but don't confuse it with himalayan salt which is not at all the same thing. Black salt has the weirdest quality where it really taste just like eggs. Use it in place of regular salt on a tofu scramble or any other egg-like recipe and prepare to have your mind blown!

There are a million trillion billion meat substitutes out there. Ok maybe not that much, but there are a lot! More options are becoming available all the time, it's the new trend!

Personally, I only eat mock meats very occasionally (not that I think anything is wrong with them!), but I just prefer homemade and whole food approaches. I could (and almost do), eat beans, tofu, lentils, or some other bean like thing everyday. I just find them so satisfying and scrumptious when prepared right.

If you want it vegan, chances are it's been made vegan. I have even tried a vegan honey, called Bee Free Honee made out of apples that was sent to me by a reader, (thank you!), and was super delish.

Along with jello, many candies contain gelatin as well (boo!!) but I already put together a list of 40+ Vegan Gummy Candies That are Actually Vegan.

I hope you enjoyed this post and found it helpful. Let me know if you have any questions, or if you found any particularly cool vegan products below in the comments.