Yes, you read that right, this is banana peel bacon. A vegan bacon recipe made from the banana peels that you would otherwise toss away. Am I crazy? Maybe a little. Does it taste good? Yes, it does. It really, really does! 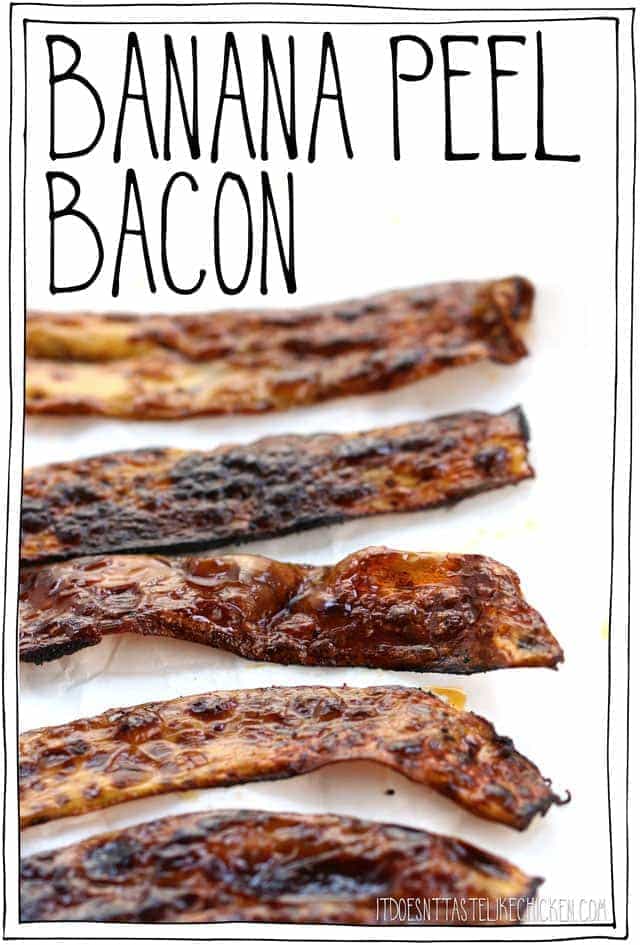 There has been a recent trend of making a vegan pulled pork type sandwich using banana peels, but for the most part, people have had bad experiences with it, saying that it actually tasted awful. But I didn't let that get me down. I was more intrigued by the idea of making banana peel bacon than the pulled pork (but let me know if you want me to give the pulled pork a try too). It took several experiments, but then the magic happened. Let me tell you, the results are good. Like actually really good. Like addictively yummy good. 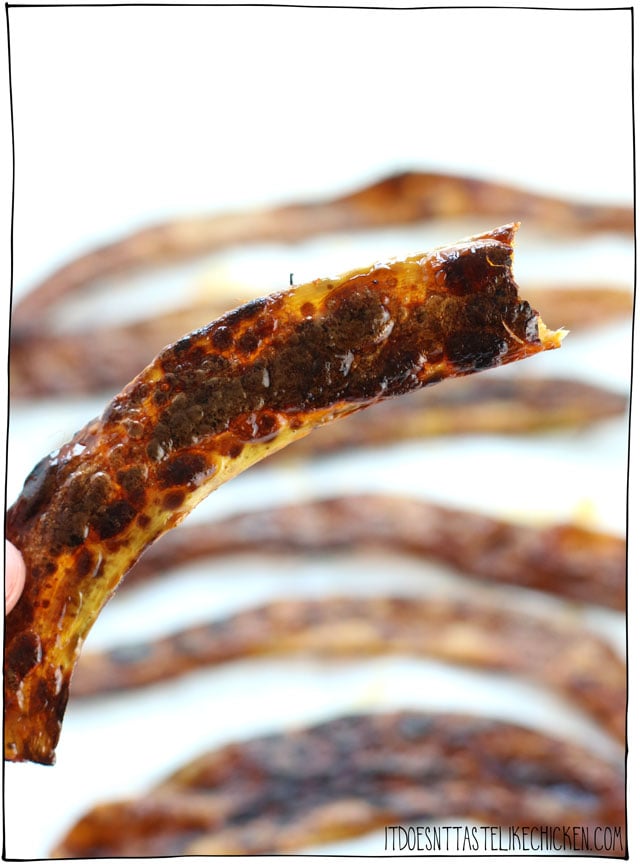 The banana peel bacon is crispy, chewy, and a bit greasy just like traditional bacon. A bit thinner than traditional bacon, the flavour is smoky, salty, slightly sweet, and has a subtle hint of banana taste which is actually quite delicious. I'm not the only crazy one who liked it, my partner Adam and my dog Chickpea were both crazy about it too!

Banana peel bacon would be delicious alongside a vegan fried egg, tofu scramble, on a sandwich, chopped and served on a salad, or to top a pasta dish! 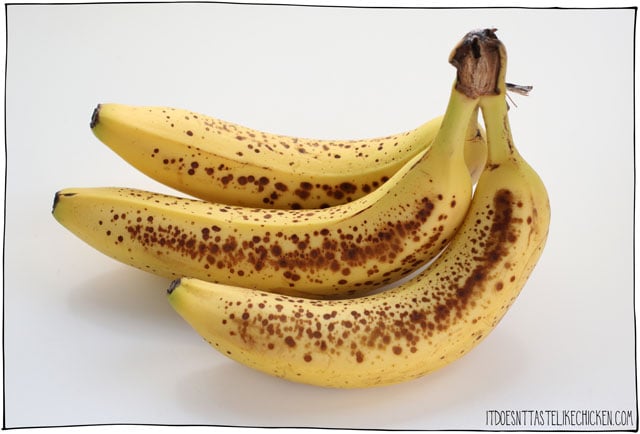 The number one most important step is to use bananas that are very ripe. Stay far away from green bananas, the bacon will taste terrible. The riper the banana the better the flavour so pick bananas that are yellow with lots of brown spots. 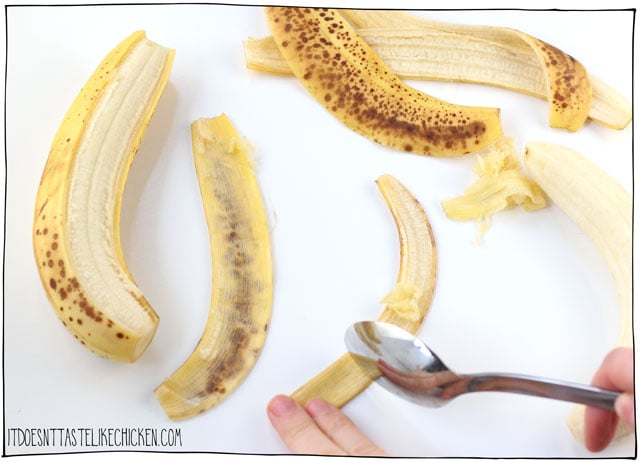 To prepare the banana peels, remove the peels from the bananas and tear into about 4 strips per banana. Use a spoon to lightly scrape off the white inside part of the banana peel leaving just the peel. 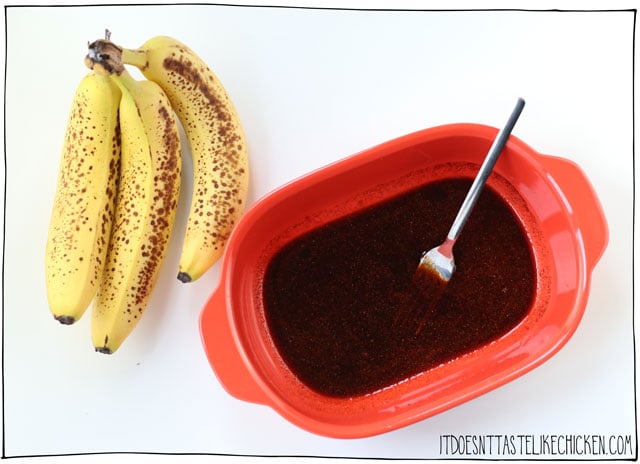 Make the marinade by mixing the soy sauce, maple syrup, smoked paprika, and garlic powder together in a dish that will fit your banana peels. 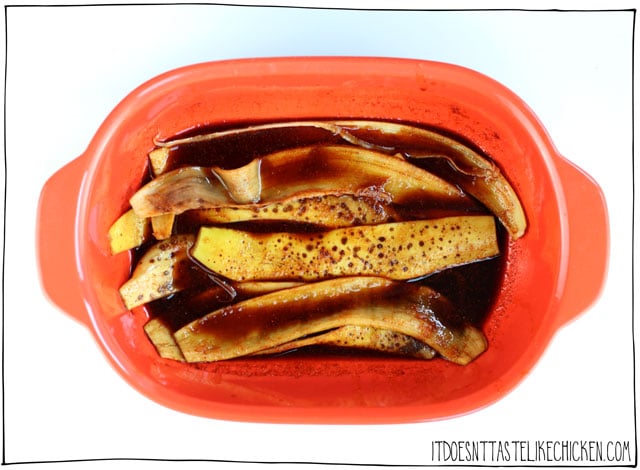 Add the banana peels and toss to coat. Let marinade for a minimum of 10 minutes, but as long as a few hours.

You will likely have leftover marinade. Feel free to make more banana peel bacon or to save the marinade for a few days in a container in the fridge to use again later. 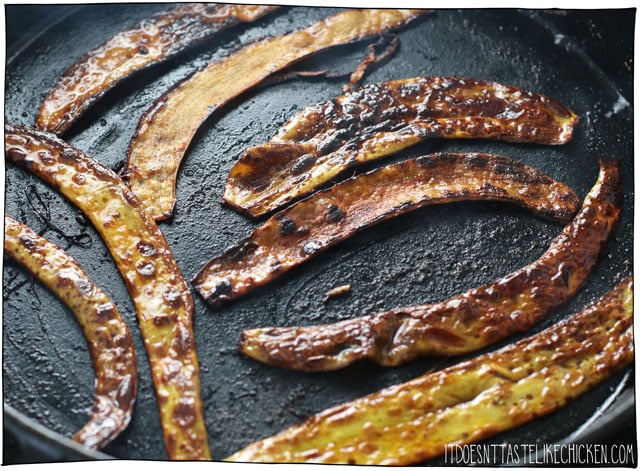 When ready to cook the bacon, heat the oil in a large skillet or frying pan over medium heat. When hot add the peels and fry a couple of minutes per side until they are golden and bubble up a little. It may get a little smoky as the sugars will burn so make sure to turn on your hood fan. Remove from pan and drain on paper towel. They should get crispier as they cool. 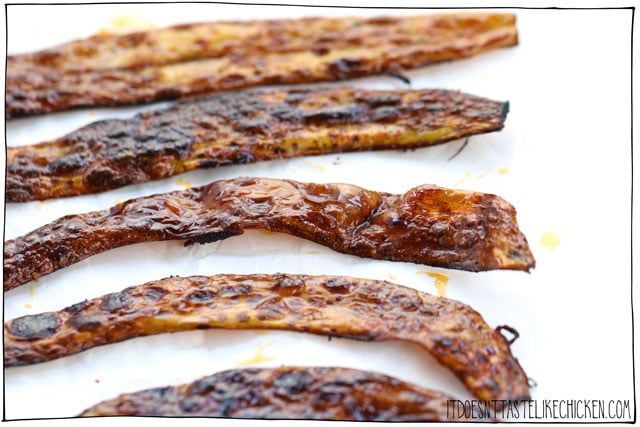 Now if you want to use up those bananas you just peeled, try more of my vegan recipes such as my banana milk, banana nut muffins, banana bread oatmeal, healthy breakfast cookies, banana coconut French toast, or any of my dessert flavoured smoothies.

The nutrition listed is for 1 serving of the marinade and oil (⅛ of the recipe), the nutrition details for the banana will vary by size (on average, a banana has about 110 calories, 30g carbohydrates, 3g fiber, 19g sugar). You will likely have leftover marinade. Feel free to make more banana peel bacon or to save the marinade for a few days in a container in the fridge to use again later. *I used organic bananas and washed them before making the bacon. Soy sauce: Several reviewers found this too salty (I like it that way), so if you prefer use a low sodium soy sauce or reduce the soy sauce to taste, and add water if needed.