Pie crust is possibly one of the worlds most difficult things to make. That and oxygen. That seems super complicated, but luckily plants have oxygen covered. Thanks plants! Now I will eat you... muhahah. 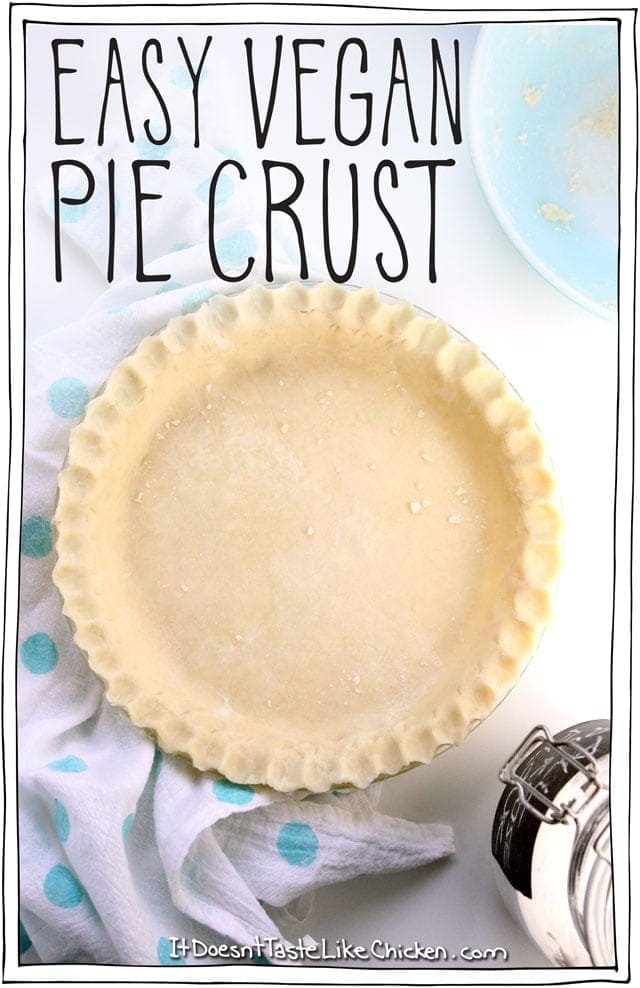 Then genius struck! By genius I mean my Nana. My mom has used my Nana's pie crust recipe since... well since I remember existing. I asked my mom to send me the recipe, and it turns out it's basically an Easy Vegan Pie Crust recipe except for the milk which is a super-easy sub. I gave it a go, and hot dang, it worked perfectly! It was quick, all the tips and techniques were there, and it was easy as pie! (Yeah I nailed that pun, you know it.)

I guess you could consider this Easy Vegan Pie Crust recipe a family secret. Hopefully, Nana will be smiling down on me and cool with me sharing this slightly adapted version and praising her awesomeness. Yes? My spidey senses say yes.

That's how much I love you guys! I am sharing family secrets with you, because you're my family. Aww shucks, group world hug.

So why does this Easy Vegan Pie Crust recipe work perfectly where my other attempts failed? 3 reasons, the correct ratios of ingredients, and two super-secret tips that I swear made all of the difference. 1 tip from my Nana, and 1 tip from my Grandma. Now that's collaboration!

This Easy Vegan Pie Crust recipe turns out the perfect pie crust, easily and quickly. It's flaky and delicious without much effort. This recipe makes one pie crust, but if you want two pie crusts, feel free to double or triple the recipe as needed.

NEW VIDEO: I made a video for my Easy Vegan Pumpkin Pie, and if you scroll down to the recipe card, you can watch me make this pie crust followed by the pumpkin pie, and topped with Vegan Coconut Whipped Cream. 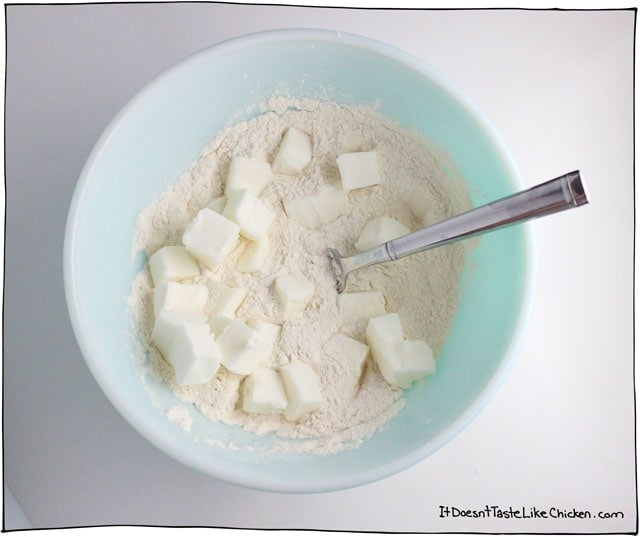 Chill your tools! Put your bowl, fork or pastry cutter, rolling pin and anything else you might be using in the fridge or freezer (if they are freezer safe) to chill. Cold tools means the vegetable shortening won't melt and the pastry won't get too soft.

When you are ready to make your pasty, whisk together the flour, salt, and sugar. Cut the vegetable shortening into cubes and sprinkle over the flour. Use a fork or a pastry cutter to slice the shorting into the flour. 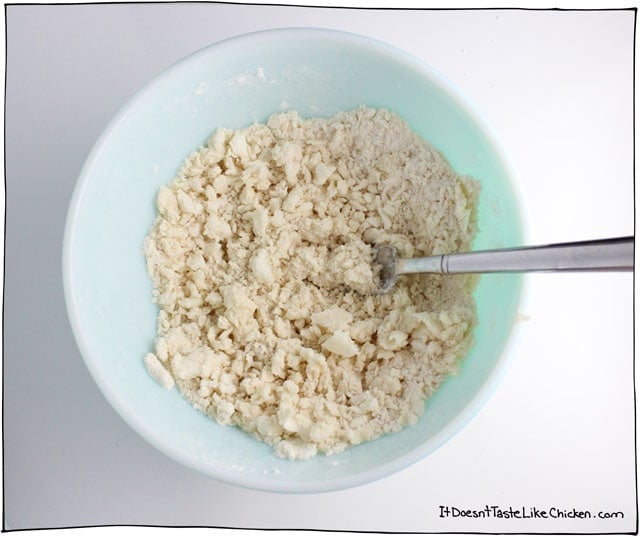 Keep on forking the pastry until you reach a crumbly consistency like this. Now drizzle the plant-based milk over top, and use the fork to continue to mix the dough. 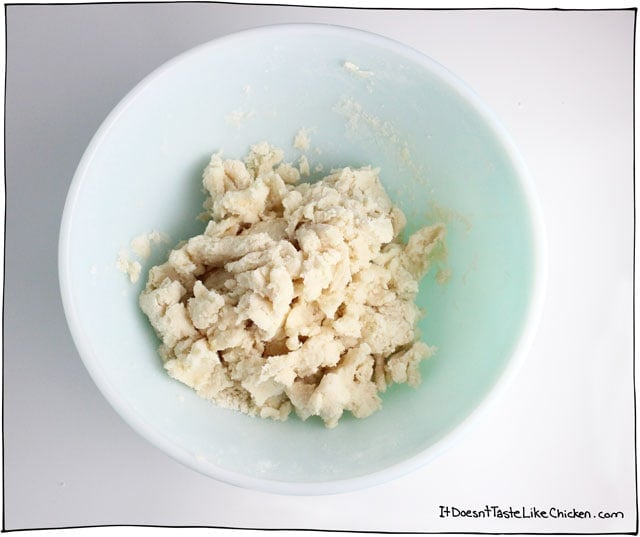 When the plant-based milk is mixed in and everything comes together like this, you are good to go. Don't over mix. 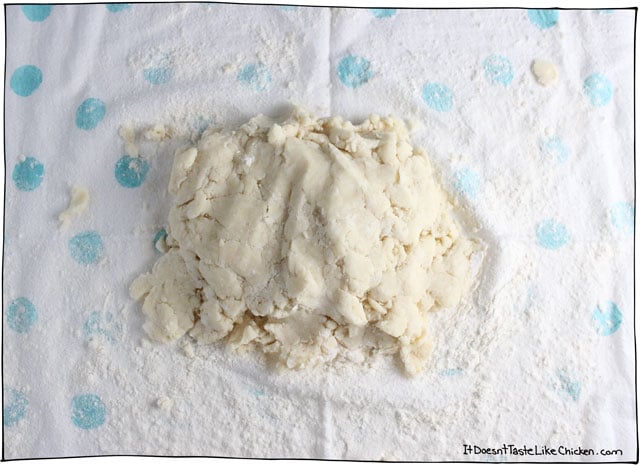 Spread a clean tea towel over your work surface. Lightly sprinkle the tea towel with flour. You are going to roll your dough out on top of the floured tea towel. I promise it won't stick as long as you flour it. This just makes it much easier to pick up the pastry and get it in the pie dish in one piece.

Roughly gather the dough into a ball and put it in the center of the floured towel. 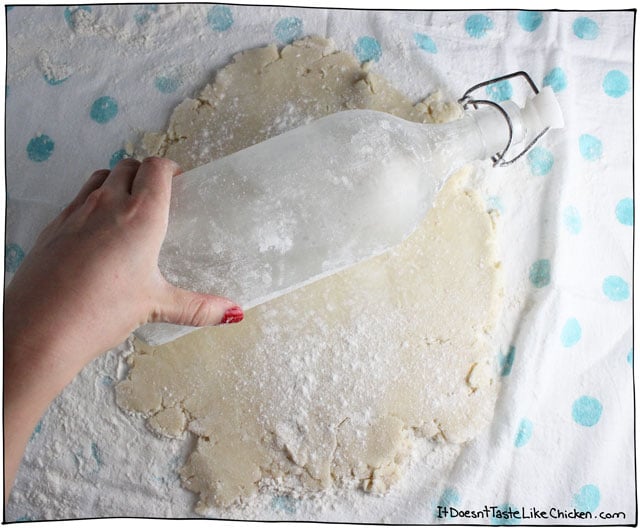 Roll your pastry out. You may wonder why there is a bottle in this picture, you see, I don't have a rolling pin, never have! So I always just use a glass bottle... and since I am wine drinker, I tend to have those lying around. If you have a real rolling pin, perfect! If not feel free to wash a round bottle and remove any labels and use that instead, they work just as well.

Lightly flour the rolling pin and roll out the pastry. If the dough starts sticking sprinkle some more flour across the surface of the dough. 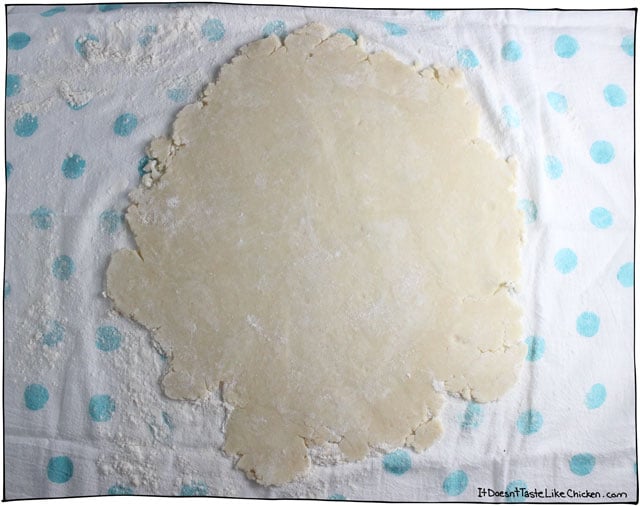 Roll the dough into a rough circle that is several inches larger than than your pie plate to allow for room for the sides and edges of the pie crust. 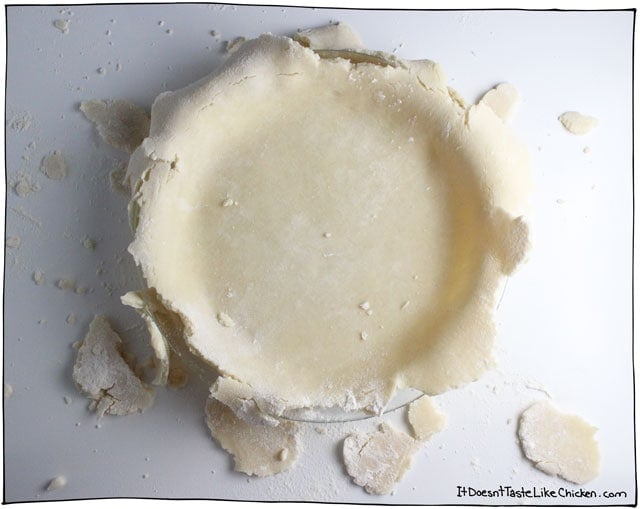 Use the tea towel to help you flip the dough into you pie pan. It's ok if pieces fall off. Use a knife to cut around the edges and cut off any excess pie crust. If there are any holes, use some of the extra dough to fill them in. Pinch the sides to make a decorative crust. Voila! Nana's pie crust. Or should I say: Easy Vegan Pie Crust! 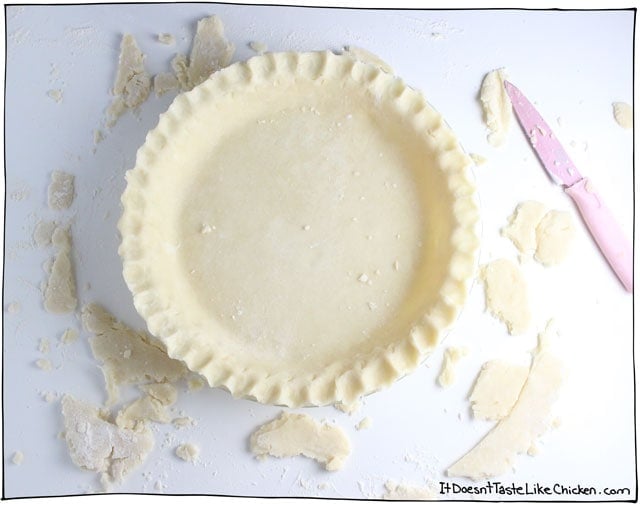 To make the dough:

To roll the dough:

To form the pie crust:

To Pre-Cook Your Pie Crust (optional):

*This recipe works best with cold tools, so put all of your tools. your bowl, fork or pastry cutter, and rolling pin in the fridge to chill. *I prefer to use a non-hydrogenated vegetable shortening, just because it's a little less bad for you, but let's be real folks, it's pie crust, it's not health food. *I found that different shortenings can be a little softer or firmer making the dough hold together a little differently. If the dough isn't quite coming together, try adding 1 tablespoon at a time more plant-based milk until the dough just comes together. *Use this recipe to make my Easy Vegan Pumpkin Pie!